A distribution warehouse is a multifaceted building that receives, sorts, stores and ships a massive number of products. Each warehouse varies in size and layout but commonly has truck off-loading bays, large areas with conveyor belts and storage systems and expansive delivery vehicle loading areas. With the large number of vehicles backing up to the loading bays and entering the building to be loaded with forklifts, monitoring levels of Carbon monoxide and Nitrogen dioxide is necessary to ensure the health and safety of the workers. Carbon monoxide is the most abundant of the exhaust fumes, but there is also the possibility for nitrogen dioxide from diesel powered engines. 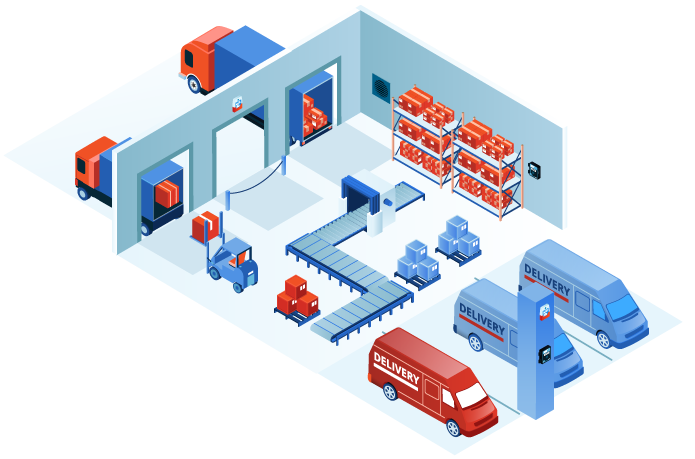 Distribution warehouses vary in size, operational layout and have similarities to that of a very large enclosed parking facility with vehicle exhaust entering and infiltrating the building from transport trucks and delivery fleet vehicles. The area inside the warehouse needs to be monitored by mounting combination carbon monoxide and nitrogen dioxide gas detectors 5 ft from the finished floor on columns throughout the building. Each sensor will monitor up to 5000 to 10,000 ft2 (464 to 929 m2) or 40 to 56 ft (12 to 17 m) radius with some overlapping to ensure the entire area is properly covered. The gas detectors can be configured with 3 levels of alarm, LOW, MID and HIGH. To protect the gas detector from being damaged by vehicles or forklifts, a protective metal guard can be installed over the enclosure.

Up to 64, two channel gas detectors can be connected to an FCS Controller which can operate as a  standalone system or be connected to a Building Automation System using Modbus® or BACnet® output.

The FCS has four 5 amp SPDT dry contact relays, which can be programmed to activate or delay the start up of the exhaust fans and the make-up air units for a specified length of time after the low alarm is activated. This allows the fans without VFD to get up to speed and stay on before they get turned off if the alarm was activated by a nearby idling vehicle or a high number of delivery vehicles entering/exiting at the same time. Using the relay’s on and off delay functionality for activating the ventilation system keeps the equipment running properly and reduces energy costs by not having the fan on constantly. Other relays can be programmed to trigger remote alarm devices in areas that will alert the appropriate personnel. For VFD equipped fans, the FCS can be configured to constantly output a 4-20 mA (current) signal or a digital (Modbus®) signal that will tell the VFD to run the fan(s) at a certain speed depending on the gas reading levels received from the LPT-P or CGAS Detector.

There should be several visual and audible alarm device such as the Remote Strobe & Horn (RSH-24V-R)mounted in highly visible areas in the facility with easy-to-read signs identifying their purpose (CO alarm or NO2 alarm).