Continuous monitoring of ethanol in microdistilleries.

Alcoholic spirits are created by the distillation of biologically produced alcohols derived from the fermented mash of different agricultural products such as grain, wheat, rice, corn, sugarcane and potatoes. The distillation process involves heating the wash and vaporizing the alcohol, which is collected in a condenser and cooled. During this process, ethanol is produced and can build up if not properly ventilated.

Ethanol is a highly flammable liquid and when it makes contact with air it becomes a highly explosive vapour. To mitigate a potentially explosive safety hazard, a gas detection system should be installed to continuously monitor for ethanol build up and leaks in tanks, fermenters, stills and other processing equipment.

Using Critical Environment Technologies’ DCC Dual Channel Controller with a remote analog CXT Explosion Proof Ethanol transmitter is the solution. The ethanol transmitter should be placed in the distillery area, near the floor, closest to the greatest potential risk of exposure. The DCC should be at eye level in an area where it can be easily viewed. If the level of ethanol reaches or exceeds the configured alarm set points, the system will trigger series of processes that involve activating emergency fans, triggering visual and audible alarms and shutting down equipment as required. 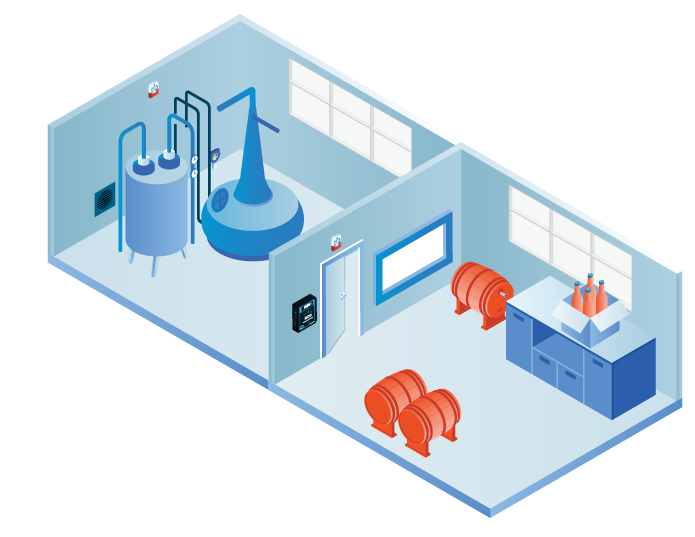 It only takes a spark to start a fire or cause an explosion, especially when flammable gases or vapours are present under the right conditions. Using an explosion proof gas detector will ensure the device contains and controls an explosion, should the gas detector’s electrical circuit become an ignition source. The CXT-A-C2H6O with the ethanol sensor should be mounted in the distillery area, 12” (30 cm) above the floor. Ethanol is heavier than air and will accumulate in enclosed areas, low lying areas and downstream from the vapour source. It should be installed near the most likely potential area of exposure. The CXT will continuously transmit a 4 - 20 mA analog signal to the DCC Controller which will show the corresponding gas level readings. The DCC should be mounted at viewing height in a central location so the display can easily be seen. There should be a remote visual and audible alarm device mounted in a highly visible area.

The DCC Controller has two gas alarm setpoints, LOW and HIGH, and two dry contact relays rated 5A @ 240 VAC. In the event of an ethanol leak, the audible alarm will be triggered and the designated relays will activate a preset response such as turning on the emergency ventilation system, triggering the remote audible/visual alarms and if necessary will shut down the processing equipment.

DCC has two 4-20 mA outputs that include VFD control and may also be used to interface with a Building Automation System (BAS) which in turn can trigger alarms and other safety procedures as appropriate.

The DCC comes standard with an internal audible alarm and is available with an optional extra loud buzzer that can be ordered and installed at the time of purchase. It has a SILENCE push button that can be used to temporarily turn of the buzzer and clear the latched relays. The DCC and CXT fixed system is fully set up, programmed, calibrated and tested prior to being shipped from the factory. It is ready to install upon arrival and operate following the appropriate warm up period.