What Could be Leaking in the Boiler Room?

Natural gas is a flammable gas that is commonly used in building heating systems such as schools, universities and dormitories. It consists primarily of methane gas. The source of the natural gas is usually in the boiler room, an enclosed area that is not frequented very often, which increases the risk of a leak going undetected. A leak not only wastes expensive fuel but could result in an explosion causing loss of life and structural damage.

When natural gas doesn’t combust properly, carbon monoxide is produced. Carbon monoxide easily travels around through the air and can migrate to other areas of the building through vents, ducts and other openings.

The design of a building’s heating system, including the location of additional natural gas heaters in more frequently occupied areas such as classrooms, can vary widely. Determining all the sources of potential leaks and what gas detection system components to install to ensure the safety of the occupants and property is important to health and safety.

Critical Environment Technologies Canada Inc. (CETCI)’s DCC Dual Channel Controller with an internal carbon monoxide sensor and an LPT-A remote methane gas sensor is the solution. The remote sensor provides continuous monitoring of the methane levels near the ceiling and is connected to the DCC Controller that has an internal CO sensor and can be configured to control equipment to alert and mitigate the hazard. 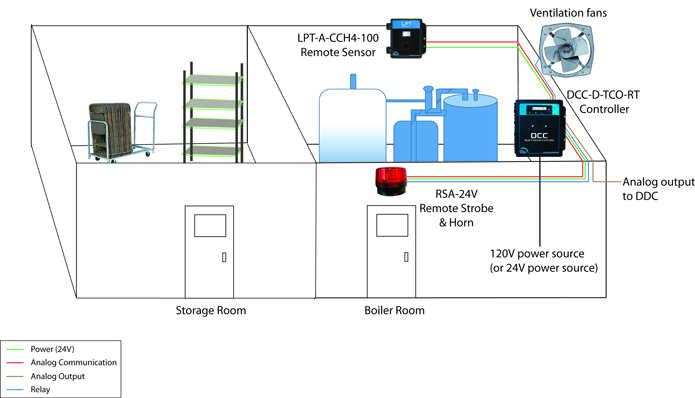 Two gas detectors should be mounted inside the boiler room - one for monitoring potential leaks in the pipes supplying the natural gas to the boiler and the other monitoring carbon monoxide levels generated by the boiler. A well maintained, efficiently functioning boiler produces very small amounts of CO, but an improperly maintained one can create deadly amounts. To monitor the CO levels, a DCC-D-TCO-RT should be mounted inside the boiler room at the “breathing zone” (4 -6 ft from the floor). Connected to the DCC should be an LPT-A-CCH4-100 remote sensor with an internal methane sensor mounted 6 inches from the ceiling above the pipes supplying the gas. Outside the room, above the door, there should be an audible/visual alarm device such as the RSA-24V Remote LED Strobe Light. If there are additional entrances to the room, each should have a remote visual/audible alarm device outside the door.

The internal relay of the LPT-A or one of the two internal relays of the DCC can be used to trigger the Remote Strobe / Horn device in the event either gas level reaches or exceeds the alarm setpoints. A second relay can be used to activate the mechanical ventilation system or trigger another set response as required. The DCC has two 4-20 mA outputs that include VFD control and may also be used to interface with a Building Automation System (BAS) which in turn can trigger the alarm and other safety procedures as appropriate. The gas level readings will show on the display of the DCC for easy viewing. It comes standard with an internal audible alarm and is available with an optional extra loud buzzer or a watertight buzzer that can be ordered and installed at the time of purchase. It can be powered by low voltage or line voltage and has a SILENCE push button that can be used to temporarily turn off the buzzer and clear the latched relays. The DCC and the LPT-A come standard in a water / dust tight enclosure that is rated IP54 with the optional splash guard installed. The DCC and LPT-A fixed system is fully set up, programmed, calibrated and tested prior to being shipped from the factory. It is ready to install and operate upon arrival.

Next
Stay up to date